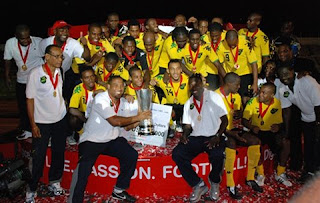 The final of the Caribbean Cup marked the end of the year for most countries as Asia and Oceania had already played their last competitive matches of the year in November with Fiji celebrating a 2-0 victory at home to group winners New Zealand, and Japan enjoying a 3-0 win away to Qatar. Saudi Arabia ended the year badly with a 2-0 home loss to South Korea.
In the North American and Caribbean section of the World Cup qualifiers, Costa Rica won 3-1 in El Salvador while Canada found the going tough in Jamaica where they were defeated 3-0.
Europe played out friendly matches with Wales winning 1-0 in Denmark, and Hungary registering a 2-0 victory in Northern Ireland. England continued their ascension of the Football Rankings with a 2-1 triumph in Germany.
In the Caribbean Cup Haiti narrowly missed out on progress to the semi-finals as they could only manage a 1-1 draw against Antigua & Barbuda, and were beaten 3-2 by Guadeloupe with a goal in the last minute sealing their fate and rendering their 1-0 win over Cuba ineffective. Grenada were the surprise package of the tournament beating Trinidad and Tobago on their way to the semi-finals where they overcame Cuba on penalties to reach the final and a meeting with hosts Jamaica. Luton Shelton converted a penalty in each half as the Reggae Boyz lifted the Caribbean Cup on home soil (pictured).
Posted by Mark at 3:38 AM No comments: