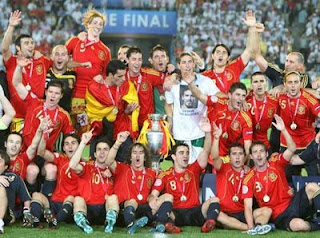 Spain (pictured) ended the year on top of the football rankings after finally winning a major tournament in the shape of Euro 2008, and continuing their run of good results in their World Cup qualifiers. The Netherlands also had an impressive year despite losing to Russia in extra time in the Euros, having sailed through the group of death with a 3-0 win over world champions Italy followed by the 4-1 thrashing of France and a 2-0 victory over Romania.
In South America Chile enjoyed the sharpest rise with wins in Bolivia and Venezuela followed by the 4-0 crushing of Colombia and a memorable 1-0 win at home to Argentina.
Egypt demolished the Ivory Coast 4-1 on their way to the final where they beat Cameroon 1-0 to win the African Cup in front of a jubilant home crowd in February. Senegal had a miserable year failing to reach the knockout stages of the Cup of Nations and suffering elimination from the 2010 World Cup at the hands of Gambia.
Grenada were the most improved country in the world, capping their year by reaching the final of the Caribbean Cup. The biggest surprises of the year were the 3-0 triumph of Lithuania in Romania and 2-1 wins for Bermuda and Liechtenstein away to Trinidad and Tobago, and Switzerland respectively.
Posted by Mark at 11:13 AM 2 comments: