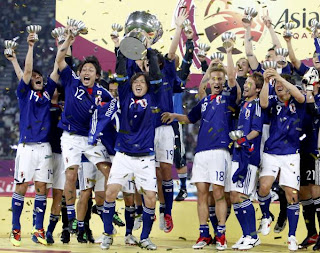 South Africa took centre stage in June and July with the World Cup being hosted on African soil for the first time, but in January Egypt, who had not qualified for the World Cup, won the African Cup of Nations in Angola with a 1-0 win in final against a young Ghana team that continued to impress in the World Cup.  Cameroon had a disappointing year scraping through their African group only to be knocked out in the next round, and losing all their group matches in the World Cup. The unattractive Algerians who progressed from their Africa Cup of Nations group thanks to the head-to-head rule were finally demolished 4-0 by Egypt and failed to score in any of their World Cup matches, though holding a dismal England side to a goalless draw may be considered an achievement. Botswana may have been absent from the final stages of both competitions but home and away wins against Tunisia moved them up in the 2010 rankings and has left them on the brink of qualification for the 2012 Africa Cup of Nations.
Spain were crowned world champions, but the Black Stars of Ghana did their continent proud by coming a penalty-kick away from a place in the top four, and New Zealand flew back as the only team not to lose a single match in the finals. Despite a glorious 1-0 victory over Germany, Serbia failed to reach the knockout round of the World Cup and were shortly after that humiliated 3-1 at home to Estonia in a Euro 2012 qualifier making them the team to move down the most, whereas Kuwait who had an active year in the Middle East taking part in friendly matches were the biggest climbers in the rankings battering Bahrain 4-1 and defeating Iran 2-1 on neutral grounds in the process.
Posted by Mark at 12:42 PM 1 comment: